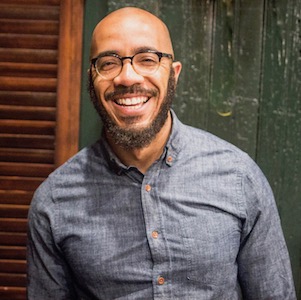 Clint Smith, a New Orleans native, is a poet and doctoral candidate in Education at Harvard University, with a concentration in Culture, Institutions, and Society. He is a 2014 National Poetry Slam champion and a 2017 recipient of the Jerome J. Shestack Prize from the American Poetry Review. He is also a Cave Canem Fellow, a Callaloo Creative Writing Workshop Fellow, and he has served as a cultural ambassador for the U.S. Department of State. His essays, poems, and scholarly writing have been published in The New Yorker, The Atlantic, The New Republic, The Guardian, The Paris Review, the Harvard Educational Review and elsewhere. His first full-length poetry collection, Counting Descent (Write Bloody Publishing, 2016) won the 2017 Literary Award for Best Poetry Book from the Black Caucus of the American Library Association and was a finalist for an NAACP Image Award. Counting Descent was the official selection for the 2017 One Book One New Orleans read. In 2018, Smith was selected as one of Forbes Magazine’s 30 Under 30 list.

Your book, Counting Descent, was the 2017 One Book One New Orleans book selection. The entire city of New Orleans read your poetry  and participated in programs connected to your work. I believe it’s the first time a poetry book was selected. Talk about how poetry has created community for you.

I was so enormously grateful to have my book selected for the One Book One New Orleans honor. I’m especially heartened and inspired by the organization’s goal of putting books in the hands of those who might not otherwise have access to certain texts, including but not limited to ESL learners, students from low-income backgrounds, and people who are incarcerated. In my own life, poetry has helped me to cultivate an artistic, intellectual, and political community. Whether it be a writing workshop alongside men serving life sentences that pushes me to consider poetry as a reclamation of agency, a spoken-word workshop with high school students that further illuminates what it means to give young people a space to make sense of the world, or a lecture on craft at a university that rejects the false division between poetry for “the page” and poetry for “the stage,” I’ve always found that poetry has served as a catalyst for dialogue that pushes my thinking in new directions.

You were born and raised in New Orleans. How has that informed your poetry?

New Orleans raised me and made me who I am. I was a senior in high school when Hurricane Katrina hit the city and finished school living with my aunt and uncle in Houston, TX. It was that experience, I think, that made me more fully appreciate New Orleans and helped me to understand how deeply the city was in my bones. It was a you don’t know what you’ve got until it’s gone sort of thing.

I didn’t begin writing seriously until college, and after I graduated, I lived in Johannesburg, DC, and Cambridge, so I never was a part of the New Orleans poetry scene in the traditional sense, but the literary tradition of the city is something I’ve carried with me wherever I’ve gone. The city is the thread the ties together so much of my work in this first collection.

You’re a 2014 Poetry Slam Champ, and you’re also pursuing your doctorate at Harvard. Often in the poetry world, there is a division between academic and performance poetry. What challenges, if any, have you faced in navigating these spaces?  Do you see yourself as a particular type of poet?

Those two parts of who I am aren’t at all in tension with one another; they’re an extension of the same scholarly and political project. There is nothing inherently better about publishing something in a peer-reviewed academic journal in Cambridge than there is about performing a poem at an open mic in DC. The fact that people think there is a material difference reflects deeply internalized assumptions about what constitutes a legitimate intellectual production, which is often laden with racism and classism. In much of my work, whether as a poet or a scholar, I’m tackling some of the same questions, simply in different ways.

You’ve described yourself as an incarceration scholar. What led you to justice reform work? How does your writing contribute to reimagining the penal system?

I don’t know that people fully appreciate how profoundly unjust the Louisiana prison system is. Louisiana’s incarceration rate is five times Iran’s, 13 times China’s and 20 times Germany’s. I mean, that’s astonishing. Those numbers disproportionately impact black people in the city, so of course as a young black man growing up there it shaped the way I understood myself in relation to the criminal justice system. My research now is specifically about children who were sentenced to life without the possibility of parole, which is a phenomenon that the United States is alone in allowing. I don’t think we’ve done enough in this country to wrestle with the question of what it means to put someone in a cage for the rest of their lives. Is that aligned with the notions of justice that we espouse? Mass incarceration won’t be solved simply by releasing non-violent drug offenders. We have to ask ourselves how we think about those who commit violent crimes, in part, because they grow up in communities saturated in violence.  That’s a much more difficult, perhaps more important, question we have to answer for ourselves.

What advice would you offer emerging poets?

I’m sure they already know this, but I’d say read as much as you can. Read across genre and across discipline. Inspiration is everywhere. You just have to be proactive in searching it out.