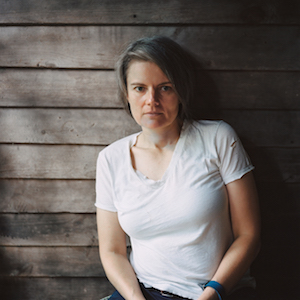 In her latest collection of poems, The Tiniest Muzzle Sings Songs of Freedom, Magdalena Zurawski investigates the complexities of the human experience through experimentation and total sincerity, concrete details and radiant abstractions, humor and hurt. “You knew something could beautifully erupt inside you,” she writes early on in this collection, and it’s true of the book itself. The entire collection is a series of beautiful eruptions.

Of Zurawski’s poems, Jennifer Moxley writes: “These poems are hyper-aware of their contradictions, yet completely emotionally vulnerable. They refuse cynicism and pretense, and such a refusal explodes any possibility of intellectual distancing or emotional hiding” (Poetry Society of America).

Zurawski is the author of the novel, The Bruise, which won the Ronald Sukenick Award from FC2 in 2008 and a LAMBDA literary award in 2009, as well as a collection of poems, Companion Animal, which was published by Litmus Press in 2015 and won a Norma Faber First Book Award from the Poetry Society of America. The Tiniest Muzzle Sings Songs of Freedom is forthcoming from Wave Books.

You begin The Tiniest Muzzle Sings Songs of Freedom with the line: “You arrive in a sentence / where you would like to stay…” what sentences have you arrived in where you’d like to stay? The poem ends with a professor stating that to be in a sentence is to be only “passing through.” What makes a sentence habitable?

I would argue that no sentence is habitable in that one can only apprehend a sentence as it unfolds in time. To be in a sentence is to experience its beginning, middle, and end, but never the three simultaneously, only sequentially. The act of experiencing a sentence requires the reader’s eventual exit from it. This part of the poem is turning a fact about the nature of reading, of experiencing writing, into a kind of existential statement. It conflates reading with life because life, too, is time-based. If I like this moment, I can’t stay in it. None of this is really any different than Heraclitus’ “You can’t step into the same river twice,” just a bit more angsty in its presentation.

I wrote this poem in motel in Paducah, Kentucky. I was driving back home alone to Athens, GA from Kansas where I had just spent a week with my friend, the poet and writer Anne Boyer. She was going through very serious cancer treatment and the visit was intense. I had driven all day and had to find a place to spend the night, and I pulled into a motel parking lot in Paducah. There were two young, brawny guys drinking beer outdoors on the second floor of the motel just above where I parked. I was trying to get a sense of whether I would be safe—I was a woman traveling alone. It was dark, and so I listened to them talk for a few minutes as I sat in my car. What I overheard was one man encouraging the other. It seemed that they were both veterans. One had just survived some serious surgery, and his friend was trying to build him up. The one was telling the other how amazing it was that he survived and how good he looked now. It was beautiful and depressing all at the same time. Two young guys trying to help each other survive a war that most of us don’t ever have to think about. It of course echoed the situation I had just left, seeing my relatively young friend suffering through both cancer and the cancer treatment.

In the poem “For the Republic,” you question the potential impact (or lack thereof) of self-improvement at this particular time in history. How do you feel about the era in which you find yourself a witness?

This poem is a response to the anxiety I felt during the first year of the Trump presidency. The speaker (I know her pretty well) is frustrated with her lack of emotional resiliency in the face of a new right-wing political environment. I was a bit surprised by the level of anxiety I felt at that time. It was all so shocking—the Muslim ban, the fascists marching in Virginia, the president’s verbal attacks on private citizens via twitter. I was frustrated both with my inability to stay calm and my powerlessness to stop any of the terrible things the president was doing. Now my anxiety is gone, but that just means I’m used to Trump. That should keep me up at night.

In the poem, “A Fold of Sun,” a drop-off occurs between two characters: an envelope changes hands. What’s in the envelope?

I had just read the Assata Shakur autobiography when I wrote this poem. I was really moved by it because I learned that she allegedly killed a police officer in New Jersey less than ten miles from where my family lived. I am a first-generation American born to Polish immigrants who had little understanding of racial politics in America. The proximity of that incident to my childhood home and my ignorance of it explained a lot to me about my ignorance of America. I was born and raised here, but my childhood home wasn’t really in America in the sense that I wasn’t being raised by people who had any way of understanding the meaning of actions taking place here. At the kitchen table there was always talk of WWII and the Soviet occupation of Poland. The old Polish women who took care of me while my parents worked were always telling me about the awful things the Germans had done. The landscape of everyone’s imagination wasn’t the actual landscape we were inhabiting. I constantly feel like I’m just learning the most basic things about America.

Anyhow, you asked me about the envelope. I was thinking about what it would mean to have to go underground and how psychologically difficult that would be. In this poem I imagined what it would be like to get an envelope full of papers that would allow you to come above ground again, to live just like anyone else, to just have coffee at a café on a nice day and not worry that anyone would notice you.

I don’t think I’ve ever read a poem quite like “Mom’s the Boon inside Our Skulls.” It reads like a dream that circles the sacrifice of motherhood. How did you construct this poem?

Many of the poems in here started as erasures of Jim Brodey poems. I had somehow acquired an extra copy of his collection, Heart of the Breath, so I started using white out to make erasures in my extra copy. It was a way of tricking myself into writing without feeling like I was starting a book. This poem started as an erasure of a Brodey poem. I don’t remember the entire process, though, because I always break the rules of whatever constraint I give myself. At some point the narrative of a mother getting stoned with her kids started emerging, and I just went with it. I liked all the weird nouns that ended up in the poem, so I capitalized them all as if it were German.